Marigold (Calendula officinalis) has been used for skin scratches, sunburn, frostbite, burns, insect bites, skin infections and warts. Not all of these uses have scientific supporting research yet. The composition of the plant contains flavonoids, terpenoids, coumarin, carotenoids and amino acids.

Marigold has been scientifically found to have skin regeneration-accelerating, antioxidant, collagen-supporting and antiseptic properties. So marigold is suitable for use in inflammation, eczema, acne and just dry skin. It is also suitable for sensitive, inflamed and delicate skin such as nappy rash.

In animal or test-tube studies, calendula has been shown to have the ability to accelerate the healing of tissue with wounds or ulcers, which is consistent with the traditional use of marigold. An inhibitory effect on the activity of microbes has been observed. Trials of an ointment made from marigold have indicated beneficial dermatitis-limiting effects in radiation therapy recipients in a preliminary scientific study. It has also been found to have some beneficial effects on skin inflammation and wound. Marigold can therefore also be suitable for skin care for sunburned, acne-prone or irritated skin, for which it is also recommended.

Marigold has been in traditional use in Europe for over a thousand years. Marigold was used in southern Europe, the Middle East, Tibetan medicine and traditional Chinese medicine (skin care). The historical area of use has been wound care, and this property of calendula has been confirmed by modern in vitro and in vivo scientific studies. When the Norse-Normans defeated the Arabs in the Battle of Cerami near Palermo in Sicily in 1063, they could already treat the wounds with marigolds. Meanwhile, the marigold has been seen as a means of combating the plague. In today’s medicine, calendula is used as a traditional remedy according to the European directive on traditional herbal medicines 2004/24/EC, while the pharmaceutical guidelines of different countries indicate its use for skin lesions. 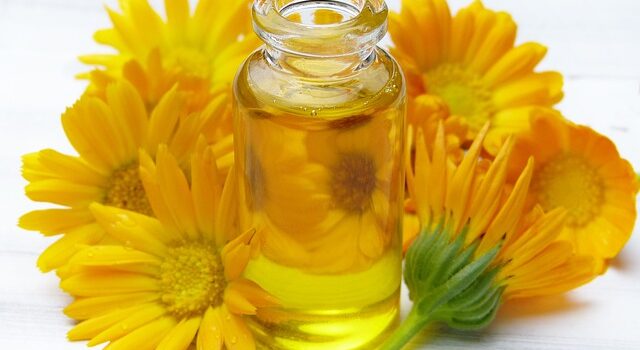