Wild Rosemary (Rhododendron tomentosum Harmaja) is so common in Estonia’s numerous bogs that it could be a national plant. It is well known for its strong intoxicating smell, which sometimes does not even care about the season and can give a headache to the person in the wild. Ledol in the essential oil gives the plant its kick. In the past, Wild Rosemary was considered a powerful and poisonous plant. For the people, it was therefore a magical plant.

Wild Rosemary is associated with a phlegm and stuffy nose loosening and immediate refreshing effect, which comes from the terpenes in the plant. Wild Rosemary is popularly considered a good and strong cough medicine.

In skin care, Wild Rosemary is credited with its scientifically proven anti-microbial and anti-inflammatory properties to help treat and speed up recovery from many skin problems.

Wild Rosemary is well known for its anti-inflammatory properties, for example for use in rheumatism. In the case of rheumatism, for example, the North American Indians already used swamp clay. Today, sookail has been seen as a potential drug candidate in this field. The folk use of the plant for colds and rheumatism has been noted since the 18th century. In recent times, salve made from Wild Rosemary is also known as Ledum salve. 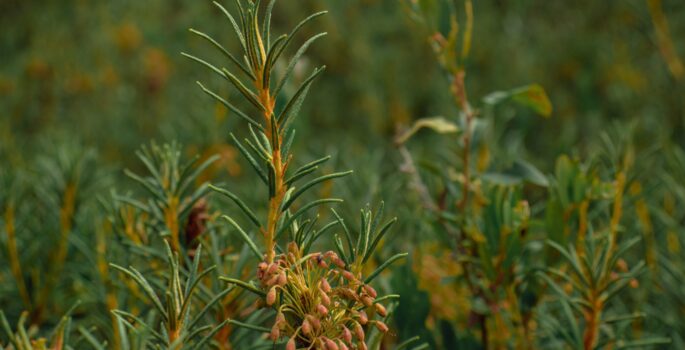