Common juniper (Juniperus communis) has been found to have anti-inflammatory and antimicrobial effects. Accelerated healing of wounds and burns has been noted as a result of accelerating the growth of skin cells.

The mythical properties attributed to juniper in the past have found scientific support today. In Estonia, juniper is mainly associated with Saaremaa, where juniper has found its advantage growing in the combination of moist sea air and poor calcareous soil. Similar conditions are also found in Northern Estonia.

In the ancient spring celebrations of the Mother Earth, the juniper had its place, which was considered a holy tree and the smoke of its berries scared away evil spirits, because they had to be seriously afraid of them at the events held at the gate of the underworld. Presumably, on these fertility holidays, women were showered with juniper branches, because juniper was believed to have a fertility-enhancing and purifying effect. This meaning was probably more widespread, because the symbol of the Syrian fertility goddess Astarte was also the juniper.

Belief in the purifying effect of juniper was so widespread that during the plague, juniper was burned for environmental protection and wooden vessels were cleaned with juniper solution. The Romans also named this property of juniper. Juniper extract or oil mixed with warm water is still recommended as a mild cleansing agent.

Due to juniper’s cleansing and antimicrobial properties, northern peoples have used juniper wooden vessels for brewing beer. Better preservation of food in wooden dishes was noticed. Juniper berries, loved by Nordic people for thousands of years, are now considered a superfood.

Scientifically, the unpleasant properties of juniper for bacteria and fungi have been associated with α-pinene, β-pinene and p-cymene. The deoxypodophyllotoxin in the formulation is defined as an antiviral agent. Juniper has found its place in antimicrobial and wound and burn healing properties. Also for joint and muscle pain and acne-prone skin.

In skin care, juniper is of interest due to its natural antioxidants, which repair and strengthen skin cells, thus reducing the signs of aging and allowing the skin to independently resist harmful effects such as strong sunlight. Antioxidants limit the harmful effects of free radicals.

In addition, juniper is seen to have skin-soothing properties such as reducing redness. In folk medicine, juniper is noted as a plant that reduces the anxiety of the mind. The skin-tightening effect of juniper has a clear effect on the appearance of the face.

Juniper has been used to neutralize harmful substances hidden in skin pores. Thus, cosmetics based on juniper have found use in keeping the surface of the skin clean. In addition, juniper has been found to have anti-inflammatory properties. Cosmetics containing juniper have therefore been considered particularly suitable for acne-prone skin. Juniper helps to reduce the clogging of pores and reduce the conditions suitable for acne. Juniper has also been found to improve the hormonal balance of the skin, which could regulate the production of natural oiliness and moisture in the skin. Juniper is said to stimulate metabolism in the subcutaneous fat layer and thereby help reduce fat and cellulite. Juniper has been recommended for massaging tired limbs.

To date, LOODU has launched three juniper-containing products on the market: Juniper Ointment, Lip Balm and Juniper Syrup. Both salves are suitable for keeping the lips in good condition, but Juniper ointment is spruce-free and supported with propolis. 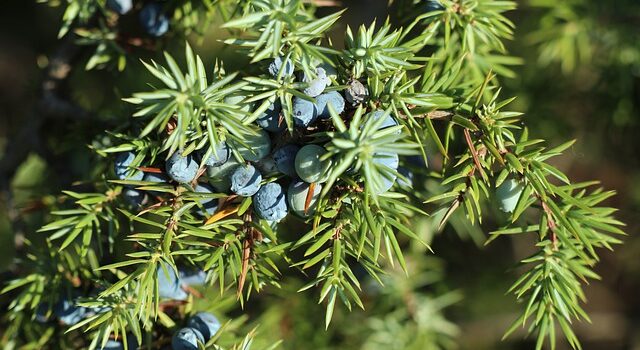